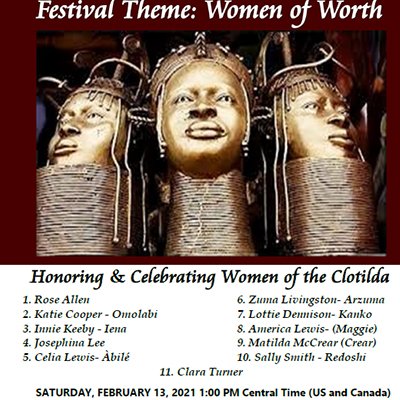 “Redoshi and Matlida were incredible women. They were among the few women survivors of the transatlantic slave trade whose stories were recorded,” says Dr. Durkin, Scholar in American Studies and Lecturer in Literature & Film at Newcastle University in the United Kingdom (England). She will be the keynote speaker for the 2021 Spirit of Our Ancestor’s Festival on Feb. 13, 2021, at 1 PM CST.

Because of the coronavirus pandemic, the festival will be held virtually as a webinar via Zoom. Her presentation will be in the form of an interview with British journalist Sean Coughlan, an award-winning education correspondent for BBC News in London.

The Festival’s theme, “Women of Worth,” celebrates Rodishi, Matilda and all the women who were among the 110 Africans brought to Mobile, Alabama, aboard the Clotilda slave ship in 1860.  They were ripped from their homes as captives by the King of Dahomey (in present-day Benin) and sold to Clotilda Capt. William Foster. They survived the horrors of the Middle Passage from Africa across the Atlantic, only to face the terrors of slavery when the ship arrived. And all of this because Mobile plantation owner Timothy Meaher bet that he could import Africans as cargo for slavery, flouting an 1808 federal law banning such piracy… .

Register in advance at
https://us02web.zoom.us/webinar/register/WN_D9Q_XOuxQk2WoeXz3YGVVg
Registrants will receive a confirmation email containing details about joining the webinar.