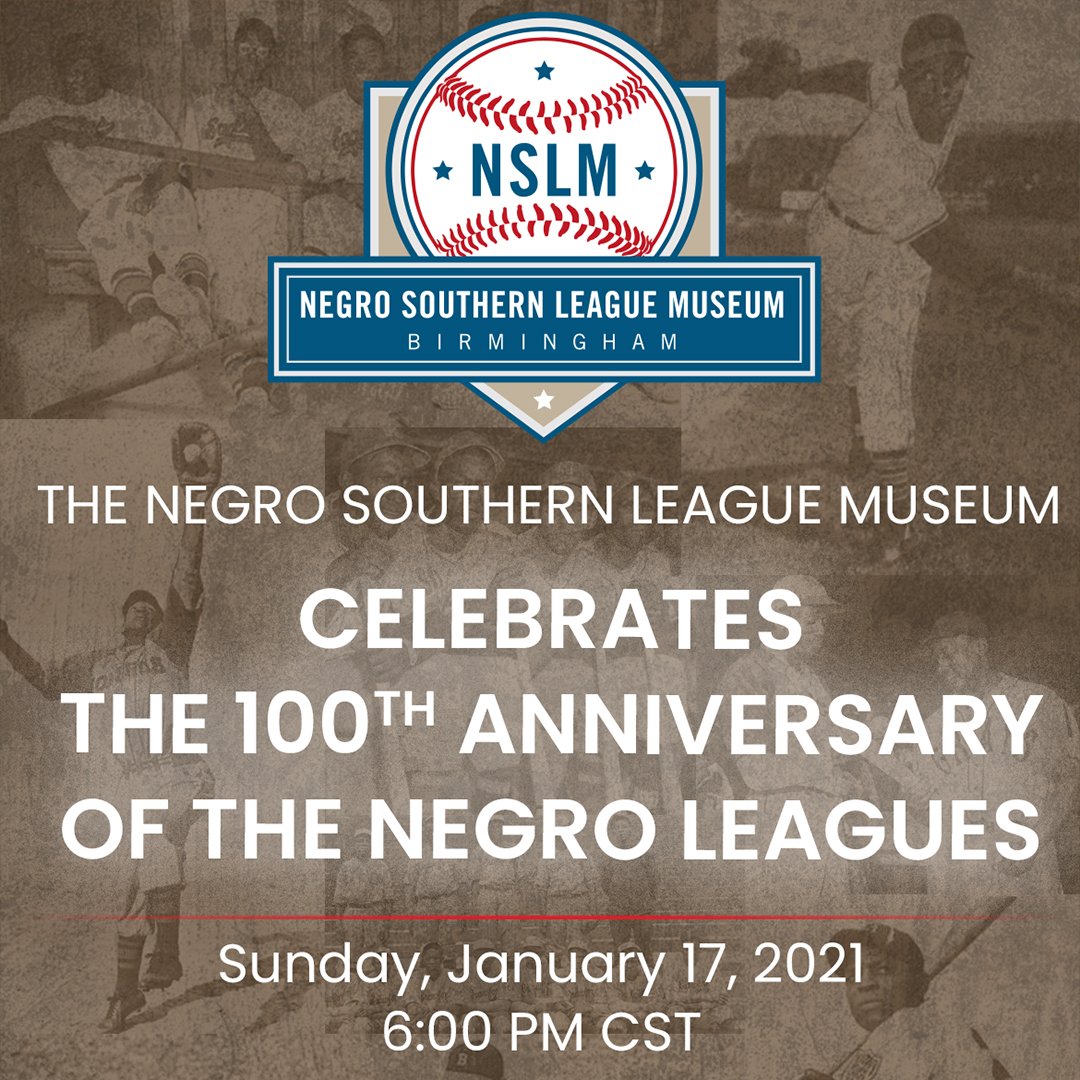 The Birmingham Negro Southern League Museum will be celebrating
the 100 th anniversary of The Negro Leagues on Sunday, January 17, 2021 beginning at 6:00 pm. Due to the current COVID-19 pandemic, the event will be streamed virtually to follow health and safety guidelines.

This celebration will pay tribute to the players of the Negro Leagues and shine a light on the impact the league had in many Black communites across the country, especially in Birmingham, AL. The event will feature special guests including former Birmingham Black Barons players James “Jake” Sanders, Robert
Vickers, Reggie Howard, former Raleigh Tigers pitcher, Ernest “Big Dog” Fann, City of Birmingham’s Mayor Randall Woodfin, and many more. In a recent statement, Alicia Johnson Williams, Director of the Boutwell Auditorium and Negro Southern League Museum said, “The establishing of the Negro
Leagues is a significant milestone in American history. Rube Foster, the Father of the Negro Leagues, accomplished the unspeakable by organizing for African Americans what was considered by many then, and equally as many now, the opportunity to play professional baseball in the Negro Leagues. This
gave black star athletes a chance to do not only what they loved, but something they were very good at during such a tumultuous time as that of segregation.”

Major League Baseball (MLB) recently announced that it would be elevating the 1920-1948 Negro Leagues to major league status. This monumental decision would allow over 3,400 Negro League players and their statistics to be placed in the MLB’s official records. Some of these players include members of
the Birmingham Black Barons such as Satchel Paige, Mules Suttles, and Bill Foster. Their careers led to their induction into the National Baseball Hall of Fame. According to the research done at the Negro Southern League Museum, Birmingham has two times more Negro League players than any city in
America.

To register for the 100th anniversary celebration of The Negro Leagues presented by The Negro Southern League Museum, please visit bit.ly/NSLM100 .

For all media inquiries or to request interviews please contact, Jasmine Phillips at jphillips@lrymediagroup.com .

The Negro Southern League Museum (NSLM) located in the heart of Downtown Birmingham, tells the story of African-American baseball in America through the eyes of Birmingham, Alabama. The museum features the largest collection of original Negro League baseball artifacts in the country. NSLM also
features an on-site research center that is supported by a research team made up of seven of the top researchers in Negro League and Southern League baseball history.

The mission of the Negro Southern League Museum is to present the history of African-American baseball in an unsurpassed manner by maintaining a world-class facility that recognizes the League’s impact on Birmingham, Alabama and the world of professional baseball. This understanding, along with acknowledging the players’ ability to inspire people of all races and transcend barriers, establishes a blueprint for the Museum to evoke a broad-sense of community and create unparalleled cultural and educational experiences that acknowledge the past, embrace the present, and frame the future.