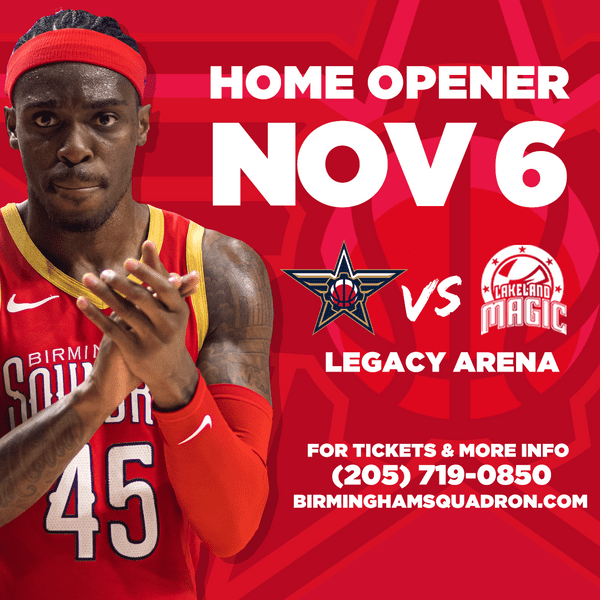 Well, here we are, back for another exciting season of NBA G League basketball as the Birmingham Squadron take on the Lakeland Magic on Sunday, November 6th at Legacy Arena. Just in case you forgot or have no idea of what I am talking about, let me get you caught up.

Birmingham landed another professional sports team in the Birmingham Squadron, the NBA G League affiliate to the New Orleans Pelicans.  The NBA G League is a developmental league (formerly the NBA D League) that is sponsored by Gatorade, which is why that “D” is now a “G.” All NBA teams are required to have a G League affiliate, which is the largest entry point for current NBA players at 47 percent.  The Birmingham Squadron officially started last November with a series of away games as the final renovations of Legacy Arena were happening.  The team is owned by New Orleans Businesswoman and philanthropist Gayle Benson, who also owns the New Orleans Saints and Pelicans.

The Squadron’s first year was pretty exciting!  The team made the first round of the NBA G League playoffs and hosted the game at Legacy Arena.  Not only that, the New Orleans Pelicans, coached by first year coach Willie Green, also made the first round of the NBA playoffs falling short to the Phoenix Suns in a tough fought series. The benefit of this for Birmingham was a sold-out NBA preseason game versus the Atlanta Hawks at Legacy Arena in October.  The city was treated to a preseason game featuring two NBA playoff teams from last season.

Additionally, in the Squadron’s inaugural season, several budding Pelicans stars suited up for the Birmingham Squadron including Naji Marshall, Trey Murphy, Jaxson Hayes and Jose Alvarado; all of whom either started in several games for the New Orleans Pelicans or came off the bench.

Now let’s talk about who is coming back

Former University of Alabama superstar John Petty (23) is back for his second year after spending sometime this summer with the Pelicans organization.  The explosive Zylan Cheatham (45) is also returning after spending some time with the Pelicans as well as sharp shooter Riley LaChance (3) and former UAB Blazer Jordan Swing; who joined the Squadron late in the season last year after spending some time overseas. Furthermore, throw in the possibility of seeing some of the young Pelicans players grab some playing time with the Squadron this season. Unfortunately, Auburn standout Jared Harper (2) won’t be back, but is currently playing in Spain.

New in the line-up

Starting with the coaching staff, T.J. Saint was named head coach as Ryan Pannone was moved up to the New Orleans Pelicans coaching staff earlier this year. New to the player roster is Pelican’s draft pick E.J. Lidell from Ohio State and Dereon Seabron of NC State, who are both on two-way contracts.  Then there is the explosive Daeqwon Plowden, who was extremely impressive in the NBA Summer League with the Pelicans. Rounding out the roster is a promising line up of young players that boasted incredible college careers and NBA G League experience with other teams.

Professional basketball in our own backyard.

After an impressive first season by the Birmingham Squadron, I think many learned that the NBA G League is simply professional basketball featuring the NBA’s next superstars.  With NBA Championship players like Jordan Poole, Gary Payton II and Khris Middleton all spending time in the NBA G League, it starts to offer a perspective of exactly what we have here in Birmingham with the Squadron. It’s exciting to know that our city is officially a gateway to the NBA.

Single game tickets, group tickets or season tickets are available online at https://birmingham.gleague.nba.com/tickets or by calling the Squadron office at (205) 719-0850.

To find out more about the NBA G League visit https://gleague.nba.com/faq