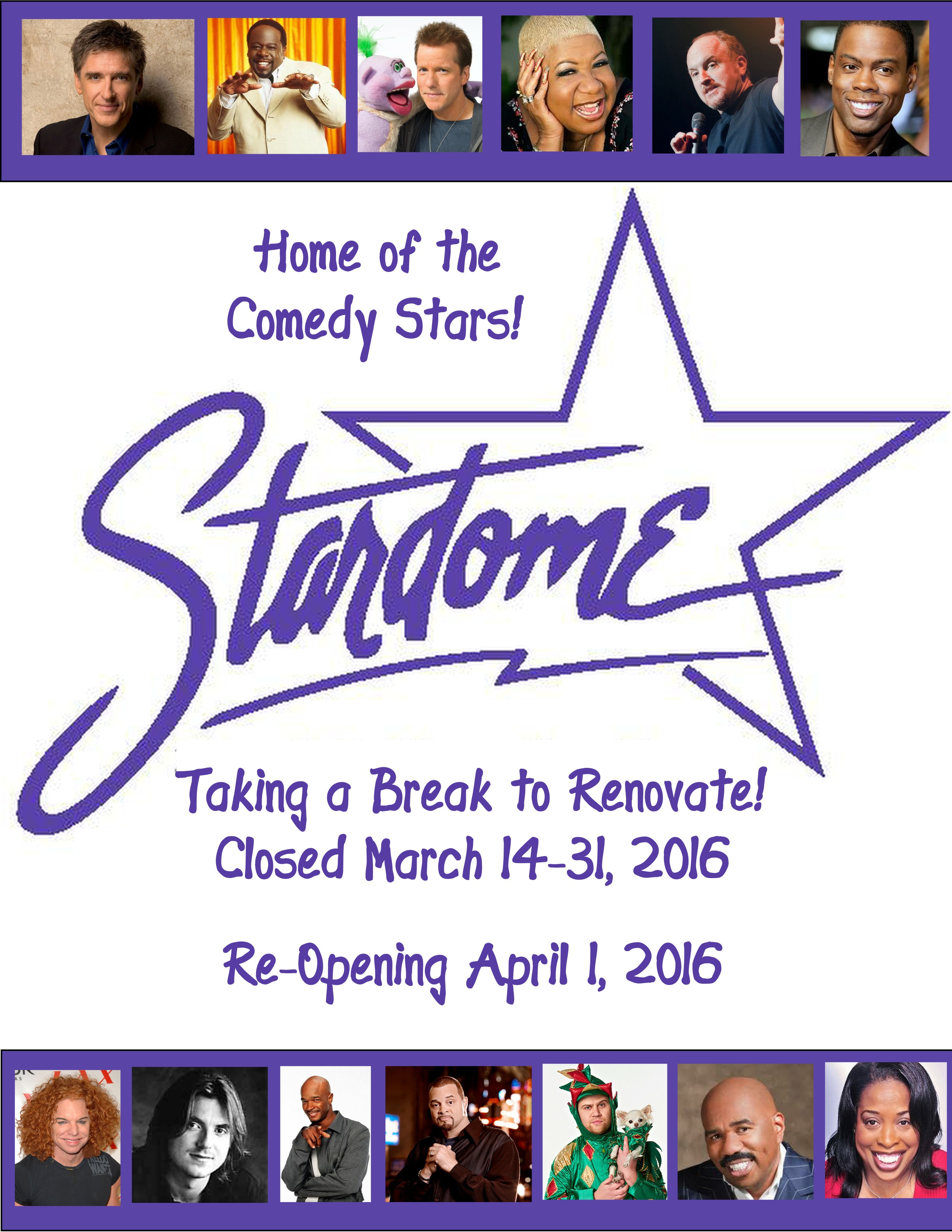 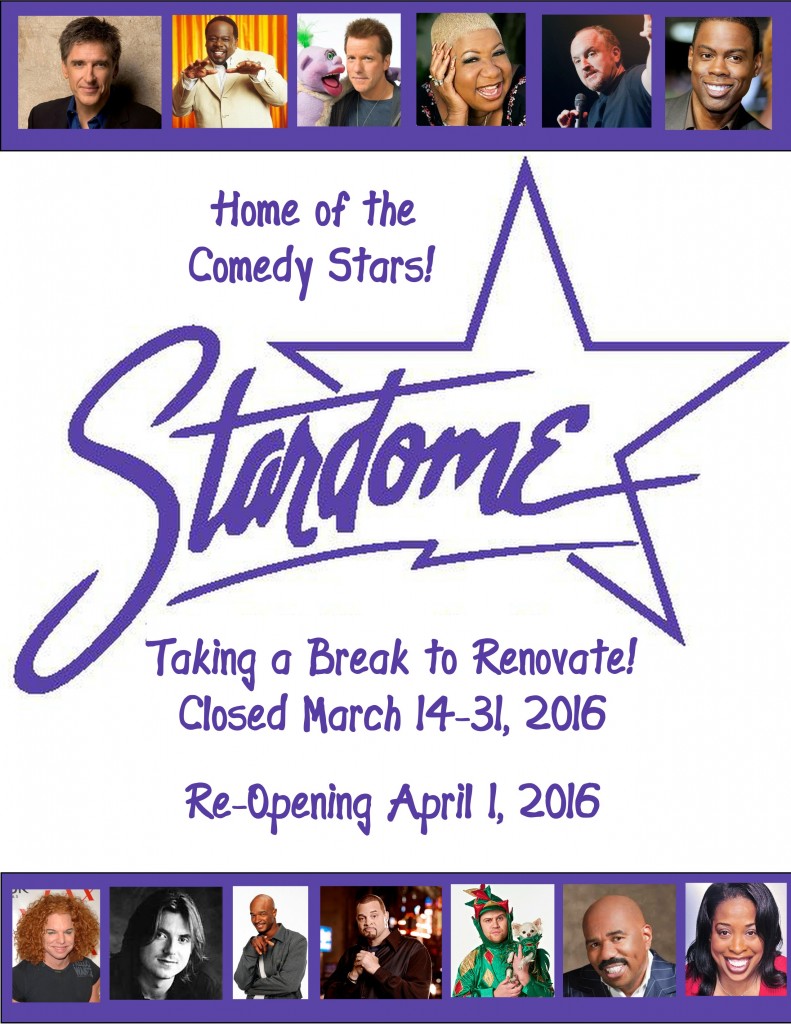 If you stand on the main-stage of StarDome theatre, you can almost hear the voices of the great comedy legends that have graced its stage over the past 23 years. The StarDome opened their doors in their current Hoover location in September 1993. That same year, three of the top stand-up comics – Roseanne Barr, Tim Allen and Jerry Seinfeld – had moved from the stage to television. In, Hoover, Alabama was settling into its newest space.

The StarDome exploded with audiences craving the top names in stand-up comedy as it opened its doors in its new location. The StarDome had previously existed as The Comedy Club for the prior 10 years. Over the next 23 years, the voices of an incredible list of talented comics filled the expanse of the main-stage theatre. Packed with an endless supply of laughter, the main-stage space has served The StarDome proud.

The StarDome’s opening weekend found Steve Harvey churning out his comedy leaving audiences rolling in the floor with side-splitting laughter. While Steve Harvey opened the StarDome, over the next 23 years, the marquee at The Stardome would proudly display the names of such comedy greats as Chris Rock, Louis CK, Larry the Cable Guy, Cedric the Entertainer, Dave Chappelle, Kevin Hart, Monique, Damon Wayans and the list goes on.

“It has been an unbelievable journey watching exceptional talent grace this wonderful stage,” commented Bruce Ayers, founder and owner of The Stardom. “But, it is only going to get better!” Ayers set-up the current StarDome as their new home after losing their existing comedy club on Green Springs Highway during the Blizzard of 1993. The Green Springs location burned to the ground after an electrical mishap caused by the blizzard.

The unfortunate mishap did not keep Ayers down. He took over the current location which had previously been a dinner theatre and turned into the number one comedy club in the country. This effort won Ayers and his family the Birmingham’s Small-Business Person of the Year award in 1994.

On March 14, 2016 The Stardome is taking a brief break from its steady flow of guests as it prepares to
wow their audiences for another 23 years. The Stardome will close its doors for approximately three weeks as it undergoes a complete renovation. “When we re-open our doors on April 1st, our guests are going to be blown away by our changes,” notes Ayers. “The existing space has served us well, but its time to rejuvenate and revitalize.”

Major renovations are planned for the legendary entertainment theatre. Included is a major reconfiguration of the current seating arrangements. “Our audiences are going to be really excited at our new seating in our main-stage theatre,” explains Dena Dow, Marketing Executive for the StarDome. “Over the years our guests have asked for better seating and we have heard them and are responding.”

Stardome set out to find the best team for its improvements, and Ayers knew he had met the right team when he met with the Mike Gibson, President of Appleseed Workshop. Appleseed Workshop is a design + build firm known for creating beautiful and highly functional commercial and residential spaces. Stardome was matched up with Appleseed organically, after Ayers visited the sushi restaurant Bamboo on 2nd and inquired who had designed and built the space.

“Cheech, my wife, and I knew what we wanted, we just didn’t know how to verbalize it to designers we met,” Ayers said. “Upon meeting Mike – we didn’t have to. He totally understood what we were trying to accomplish and took it to a level that surpassed our vision. After visiting a performance he saw exactly what we needed to do and knew exactly how to do it.”

The main-stage itself has undergone an incredible transformation as a part of the overall renovation project. The upgrade goes far beyond an update to the look and feel. It provides an amped up atmosphere for the audience.

“Part of what we love to experience when we come to hear comedy is to be in an environment to laugh,” said Korey Washington, famed production designer. Mr. Washington used his decades of experience as a Production Designer for television and film and revamped The StarDome main-stage in a way that creates a modern sleek feel with the production quality seen on any prime time special today.

In addition to the production design provided by Korey Washington, The StarDome has newly designed lighting system designed by Sami Serrag from Media Visions. With these high-tech upgrades, The StarDome has far surpassed the traditional stand-up comedy club, morphing it into a high-tech entertainment venue.

There is little within The StarDome that is going untouched. A new bar is planned – The Star Bar – for guests to mingle after the shows with the entertainers. In addition, the bathroom facilities and the existing bar space – The Blue’s Bar – are being renovated. Overhauls of the interior space will also be matched with an exterior facelift.

But the changes at The StarDome goes beyond the physical space. A complete upgrade to the operational aspects is also underway. From a re-work of the existing food and beverage menus to an expanded and refreshed serving team, the customer-service levels are being raised. “We took to heart the feedback we received from our guests and are making great strides to correct any deficiencies in our guest’s experiences,” explains Ayers.

A newly renovated theatre. A newly implanted menu. A new and energized operational team. You would think it would end there. That’s not good enough for Bruce Ayers and his team. “As we developed our new strategy for what we call our ‘reset’, we wanted to up the ante even more,” Ayers noted.

Enter Positively Funny Improv. When The StarDome reopens its doors on April 1, 2016, Birmingham’s very own Positively Funny Improv will be a new entertainment offering for the StarDome guests. The two comedy power-houses have become partners in their joint quest to bring the best in comedy entertainment to the beloved StarDome theatre. “We will continue to book the top name in stand-up comedy entertainment,” says Ayers. “But, now with The StarDome as PFI’s new permanent home, we will also be bringing comedy made-up on-the-spot by the South’s best Improvisers.”

Positively Funny Improv has been entertaining audiences every week in the Lakeview District of Birmingham for over four years. They just ended a concurrent 16-month stint at the Hyatt Regency Wynfrey Hotel. “I cannot tell you how excited we are to have The StarDome, such a recognized comedy name, as our new partner,” says David Grissom, founder and Chief Creative Officer of Positively Funny Inc. “We look forward to bringing the funny to a whole new group of fans.”

Positively Funny Improv’s new home is The Broadway Room inside The StarDome theatre. In addition to their regular weekly performances on Thursday nights in The Broadway Room, PFI will also bring special shows to the main-stage beginning this Fall with their politically-themed musical parody production, Electile Dysfunction, or Getting a Rise in the Polls.

While the new improvements and new entertain offerings for The Stardome bring new and exciting changes to a legendary venue, the voice of the late great Mitch Hedberg will forever echo in The StarDome’s main-stage. A stage filled with  cherished old memories.

The StarDome will close its doors on March 14, 2016 and is scheduled to re-open on April 1, 2016. For more information on The StarDome Theatre, visit www.stardome.com.

About The Stardome Comedy Club
The StarDome, the Number One Comedy Club in the country, was opened in 1983 by Bruce Ayers, well known Birmingham business entrepreneur. This full-service comedy theatre has been home to many of the famed names in stand-up comedy, including Steve Harvey, Tim Allen, Sinbad, Kevin Hart and the late Mitch Hedberg.

Awarded the 2013 “Best of Birmingham” award by Birmingham Magazine, The StarDome is family owned and operated with Bruce at the helm. With his wife, Che Che Ayers, at his side Bruce provides Birmingham audiences top-notch entertainment and excellent customer service keeping the laughter flowing in Birmingham. Bruce’s daughters also help oversee the theatre’s operations with Gina Zimmerman serving as Accounting Manager and Dena Dow in the role of Marketing Director.

The StarDome theatre opened in its present location in Hoover in 1993. The 420 seat theatre is opened 6 nights a week with a full-service restaurant and bar, the main-stage theater and The Broadway Room which provides entertainment in a more intimate setting.

Positively Funny, Inc. is a professional Improvisation company based in Birmingham, Alabama, founded in July 2010. The company provides public entertainment through regularly scheduled venues in the area. The troupe appears weekly on Tuesdays at The Rare Martini in Birmingham’s Lakeview District, and recently celebrating its three-year milestone at that venue.