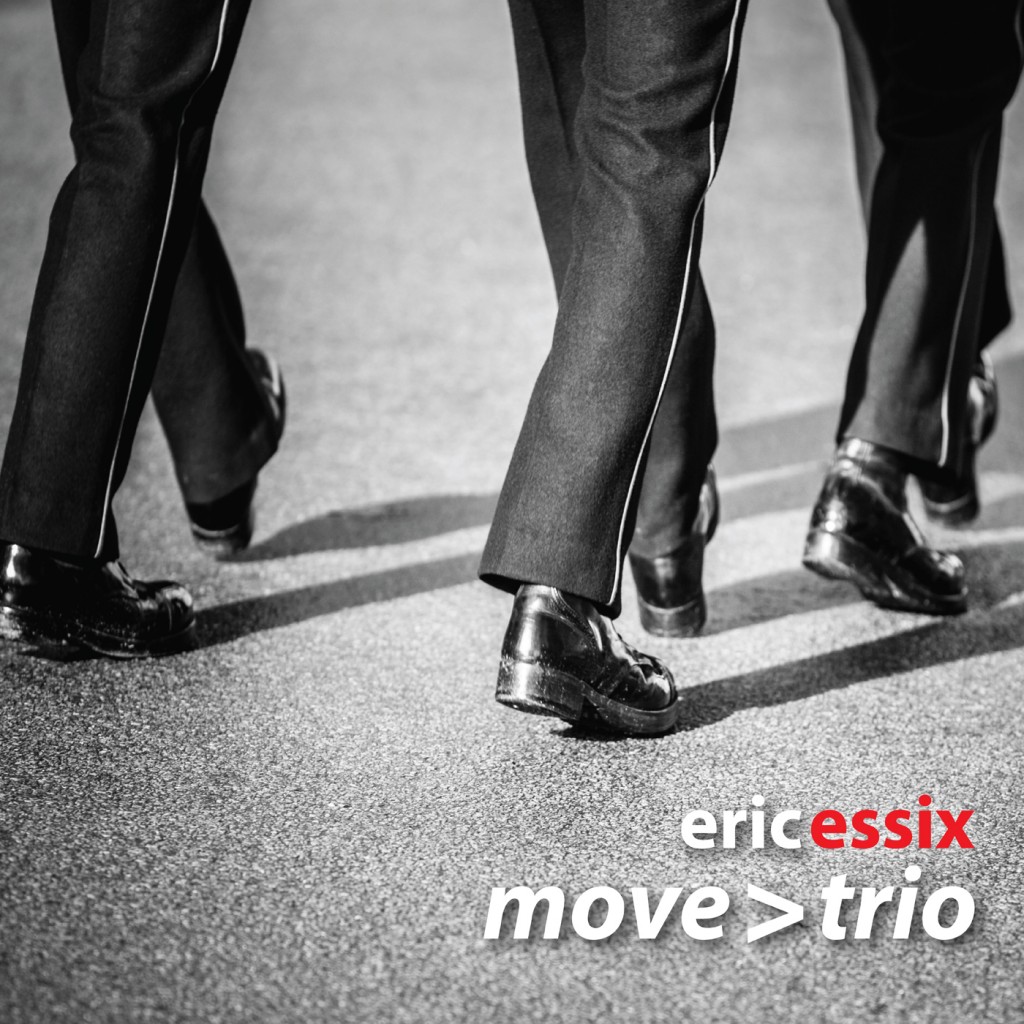 Guitarist Eric Essix has never been satisfied with preserving the status quo when it comes to his music. In fact, his primary goal is to dismantle past ideas and reinvent them, always including his southern roots as part of the dialogue. With his latest project, the MOVE>trio, Eric accomplishes that and more.

MOVE> is three fifths of his old touring ensemble compressed into a lean, agile and inventive trio that is as fun to watch as it is to hear. “I wanted to take away elements of the larger group and see if I could still produce a viable sonic representation of the music,” Eric says. “That was the basic idea from the start with MOVE> and we are constantly striving to get as much music out of this small package as possible every time we step onstage or into the studio.”

While Eric may be at the head of MOVE> as its leader and composer, the heartbeat of the group is drummer, James “PJ” Spraggins. PJ is a bandleader in his own right with a total of three releases as a solo artist including a brand new CD entitled Time To Heal on which he also plays keyboards, composed and produced. He has performed and/or recorded with Ronnie Laws, Stevie Wonder, Roy Ayers, Martha Reeves, Randy Owen, Kirk Whalum, Marcus Miller, The Blind Boys of Alabama, Alex Bugnon and Frank McComb. PJ has been a consistent member of Eric’s various touring ensembles for over a decade and brings a strong sense of groove, musicality and dynamics to the trio.

If PJ is the heart of the band, MOVE’s Grammy nominated producer and multi-instrumentalist, Kelvin Wooten is truly its soul. Kelvin plays electric bass guitar and keyboards onstage and in the studio with MOVE>. But it is his ability to play complex multiple parts on the keyboards – in real time – that amazes audiences everywhere the group performs. Wooten brings a hyper soulful sensibility to every note that he plays (on any instrument) that resonates well beyond his years. His extraordinary work in the studio as a songwriter and producer has led to Grammy nominations with Anthony Hamilton and Mary J. Blige and he has had major releases with Jill Scott, Raphael Saadiq, Floetry, Chrisette Michele, Goapele, Kelly Price, Emily King, Musiq Soulchild, Dwele, TLC, Chante Moore, Earth Wind And Fire, Tony!Toni!Tone!, Bee Gees, Angie Stone, Warren G, The Isley Brothers, Ginuwine, Eric Benet, Joe, Babyface and many more.

The debut album by Eric Essix’s MOVE>TRIO (recorded at Wishbone Studios in legendary Muscle Shoals, AL) is set for an August 14, 2015 release on the Essential Recordings label in digital download formats as well as physical cd’s. MOVE> performed several European tour dates in July and August 2015 and plans to continue touring in U.S. markets well into 2016.
Eric Essix MOVE>Trio is available for download TODAY on iTunes, Amazon.com and physical copies on CD Baby and Amazon.