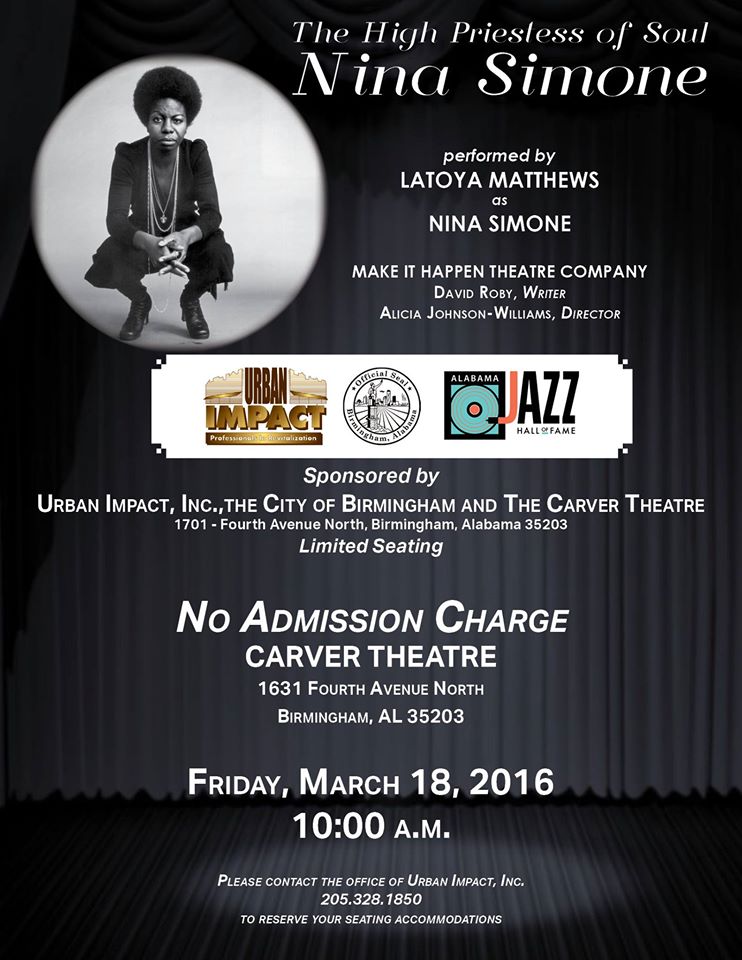 Birmingham, AL – Continuing controversy over actress Zoe Saldana’s portrayal of Civil Rights activist and jazz singer, Nina Simone, in the film biopic of the late Priestess of Soul, won’t hinder celebration of the strides made in African-American history. Urban Impact is sponsoring a free performance of Make It Happen Theatre Company’s (MIH) original musical, The High Priestess of Soul: Nina Simone, for Birmingham school children, scheduled for Friday, March 18 at 10:00 a.m. at Birmingham’s historic Carver Theatre. This one-time only performance, directed by MIH Founder, Alicia Johnson-Williams, was written by actor and playwright, David Roby, and features Birmingham’s own vocal powerhouse, LaToya “Toya” Matthews, as Nina Simone, in a jaw-dropping portrayal of the late singer.

he High Priestess of Soul: Nina Simone premiered to a full house in 2013 at Jazz Underground, announcing the return of the Southeastern region’s premiere multi-cultural theatre company, Make It Happen Theatre, to the arts scene. With over 20 years of experience producing theatrical productions, Johnson-Williams is not a newcomer to the arts. Her passion is evident in all she creates, and the production of Nina will certainly inspire Birmingham youth to remain encouraged and focused as they pursue their goals in spite of the barriers they are confronted with on a daily basis.

“We all have had to overcome barriers in our lives, be them tragic or otherwise,” said Johnson-Williams.”But the true victory lies in our perseverance. Therefore, it is important that we continue moving forward to make things happen despite the negativity that surrounds us.”

Even if that negativity is that of Saldana’s casting in the “Nina” film. Matthews’ portrayal of Nina Simone in voice and carriage will be true to life and will once again astound audiences city-wide, demonstrating a true connection Matthews has created with the material of one of the world’s most powerful and renown artists of the 20th century.

Schools or educators interested in arranging classes or clubs to attend must contact Urban Impact at 205-328-1850 to reserve seating as soon as possible, as space is limited.

For media inquiries only, contact LaShanna Tripp at 205-837-3075 or LRP@WordzandRhythmz.com.

Urban Impact’s mission is to preserve the physical structure of the 4th Avenue Historical Business District, the only intact African-American Business District in the State of Alabama. We do this by promoting economic development, providing technical assistance to merchants and developers in the District, and informing the general public of the District’s cultural and historical significance.

About Make It Happen Theatre Company, Inc. Make It Happen Theatre Company, Inc. is a 501(c)3 nonprofit organization whose mission is to provide on an annual basis, a season of quality theatrical productions, cultural diversity workshops and arts events for adults and children. To bridge the gap among the cultures, promote literacy and provide positive, productive performing arts experiences for adults and children in the greater Birmingham Area. As well as, to establish itself as one of the Southeastern region’s premiere multi-cultural theatre companies, to provide quality theatrical productions. To view the photo gallery, visit www.facebook.com/MakeItHappenTC.