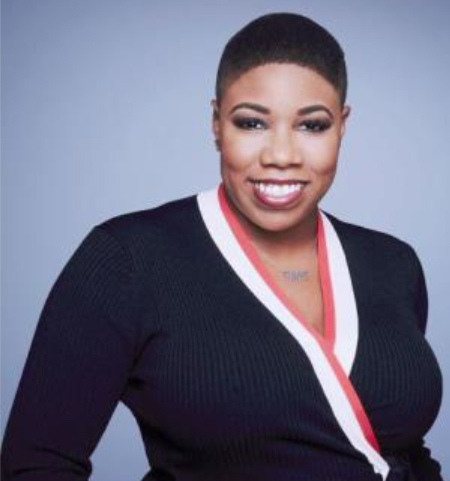 The 15th annual McDonald’s® 365Black® Awards is set to bring every day heroes and celebrities from across the country to the Ritz Carlton, New Orleans. The dynamic event will take place during ESSENCE Festival® weekend and recognize exceptional leaders who make positive contributions to the African- American community. McDonald’s presence at the Essence Festival affirms the brand’s dedication to celebrating everyday people who are striving to make a positive difference in their communities and move Black culture forward.

Symone Sanders is a champion for women, communities of color and those in need. Sanders is a go-to political commentator, a Spring 2018 Resident Fellow at Harvard University’s Institute of Politics and the Strategist for Communications and Political Outreach at Priorities USA. Symone rose to prominence during her tenure as the National Press Secretary for U.S. Senator Bernie Sanders presidential campaign. At 25, Symone demonstrated an uncanny command of the issues earning her a place in history as the youngest presidential press secretary on record and a spot-on Rolling Stone Magazine’s list of 16 young Americans shaping the 2016 election.

Sheryl Lee Ralph is an acclaimed veteran of film, television and the Broadway stage. Her award-winning work includes creating the role of Deena Jones in the legendary Broadway musical, “Dreamgirls” and earning Best Actress nods for Tony and Drama Desk Awards. No stranger to television, Sheryl Lee Ralph’s past TV credits include “It’s a Living,” “Designing Women,” “The District,” and “Moesha.” For the last three years, Sheryl was a lead on the hit Nickelodeon series “Instant Mom”. Ralph is also the creator of the Jamerican Film and Music Festival. Ralph has been one of Hollywood’s biggest voices in the fight on HIV/AIDS for over two decades with her Divas Simply Singing foundation.

Kimberly Bryant is the founder and CEO of Black Girls CODE, a non-profit organization dedicated to “changing the face of technology” by introducing girls of color (ages 7-17) to the field of technology and computer science with a concentration on entrepreneurial concepts. Bryant enjoyed a successful career in pharmaceutical and biotech industries for more than 20 years. She has helped Black Girls CODE grow from a local initiative to an international organization serving more than 7,000 students. She was named a White House Champion of Change and received a Social Progress award from the Smithsonian Institute for her national work in increasing opportunities for women and girls in technology.

Monique Vann-Brown is the owner of seven McDonald’s franchises in the Ann Arbor, Michigan area and managing partner of her parent’s two Detroit restaurants. Her career began at the age of 14 as a crew member at one of her parent’s McDonald’s locations. She transitioned into the automotive industry at 17 as an engineering intern. After several years in supply chain management, she pursued her dreams of entrepreneurship in the McDonald’s Corporation Registered Applicant & Next Generation Programs. She soon became Co-Chair of the National Black McDonald’s Operator’s Association. This committee produced events designed to serve as a forum for future leaders within the McDonald’s Owner-Operator community.

Tishauna Wilson is a rising junior majoring in computer science at Florida Agricultural & Mechanical University. She learned how to code in high school where she graduated at the top of her class. Earlier this year, Wilson revived the computer science research program at her university, where she is working on four Artificial Intelligence projects. The research projects consist of detecting fraud through conversations, identifying credit card fraud, as well as developing a voice-activated, self- driving drone and a basketball referee system. Wilson has hopes of pursuing a PhD in Computer Science, founding an autonomous automotive manufacturing company, developing into a distinguished engineer and researcher and becoming a future CEO of a Fortune 500 technology company.

This year’s McDonald’s 365Black Awards will be hosted by acclaimed actress Essence Atkins. The luncheon will feature an all-star line-up of musical performances by R&B swooner Dave Hollister and gospel heavy-hitter Le’Andria Johnson.

McDonald’s brings together community leaders, television and music entertainers, along with local and national influencers for its annual awards event.

BACKGROUND: McDonald’s 365Black Awards launched in 2003 as an extension of the company’s 365Black platform, which celebrates the pride, heritage and achievements of American-Americans year-round. For more information, visit www.365Black.com. Follow @365Black on Twitter and use #365BlackAwards on all social platforms for the latest news on the awards.