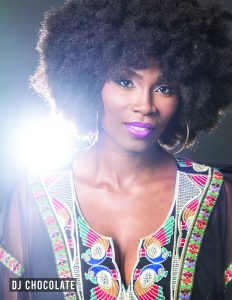 Grown and Greek TV aims to highlight alumni Greeks that have excelled in community service and in their personal careers.

Birmingham, Alabama — Alabama based radio personality and business woman Phaith “DJ Chocolate” Frazier has launched a national web series which highlights the philanthropic side of alumni Greek life.  Grown and Greek TV was launched in the fall of 2017 and travels the country talking with alumni members of Black Greek Letter Organizations commonly referred to as the “Divine 9.”  The primary objective of the web series is to share the community service efforts of the various organizations as well as the personal and philanthropic accomplishments of alumni members.

“If you look around any city you will find alumni chapters that are very active in the community as well as members that have achieved some phenomenal things. Our objective is the share these great stories with the world in hopes of educating the public on the substance behind Black Greek Letter Organizations and why they are so important to the communities they serve.” says Frazier.

The Divine 9 Greek Community boasts over 2.5 million members which makes up almost 8 percent of the African American Community.  Frazier’s mission with Grown and Greek TV is to share the community service initiatives and the personal accomplishments of the alumni members of the Divine 9 from around the country. The objective is to empower and inspire a movement of personal excellence and community service among the African American Community at large while connecting these organizations to public and private sector agencies that have similar objectives.

Grown and Greek TV has covered events and alumni chapter activities in Hollywood, California; Nashville, Tennessee; Orlando, Florida; Tampa, Florida; Harlem, New York; New Orleans, Louisiana; Birmingham, Alabama and Punta Cana, Dominican Republic.    The series will participate in the upcoming Mid-West HBCU Weekend in Columbus, Ohio August 2 – 5, 2018 with plans to travel to Washington D.C. and Dallas, Texas this fall. In addition, Frazier and her team will host a Grown and Greek Weekend which is scheduled for August 23 – 26, 2018 in Birmingham, Alabama.  The weekend will feature a Community Forward Luncheon and a host of Family and Social Activities that will focus on connecting Black Greek Letter Organizations with public and private sector leaders as well as community leaders.   Plans to host similar Grown and Greek Weekends around the country are under development.

Frazier is an Alabama based business woman, radio personality and Corporate/Special Events DJ.  She is also an active member of Alpha Kappa Alpha Sorority, Inc.

Grown and Greek TV can be found online at www.GrownAndGreekTV.com and currently features over 16 episodes.  Additional episodes are scheduled to be released in the second half of 2018.