The day there was too much football in Alabama…said no one ever. 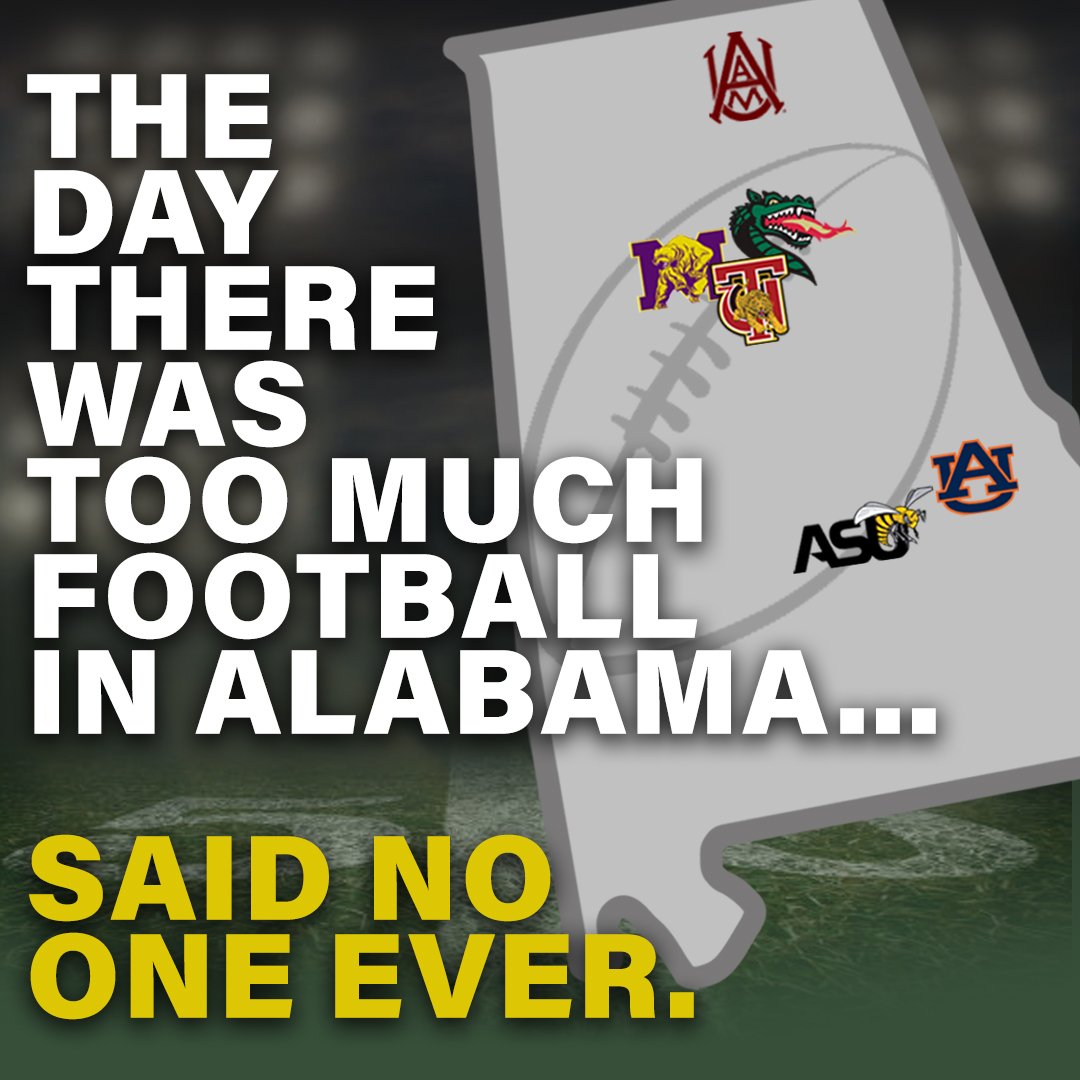 The day is Saturday, October 9, 2021, and it may just go down as the day there was just too much football in Alabama … said no one ever.  After all, this is a football state with its share of College Football National Championships and some serious fans of Friday Night Lights.

So why exactly is October 9, 2021 a day we should prepare for here in Alabama?  Well, on this day, there will be a total of 3 Homecoming Games featuring major HBCUs located within the state; a matchup between two of the most popular HBCUs in the southeast; a hometown game featuring a reigning college championship team at its brand-new stadium and a highly anticipated clash between two SEC powerhouses!  That’s right! We have the perfect formula for an overload of college football in Alabama, which is almost an unthinkable thought.

In Huntsville, Alabama the Alabama A&M Bulldogs face off against SWAC opponent Jackson State.  If you don’t know Jackson State is the new home of NFL Hall of Famer Deion Sanders aka “Coach Prime” who brings with him a talented team featuring one of his sons at quarterback and the other as a defensive back.  From what we have seen both young men are real ballers so get ready for some action on “The Hill.” Let’s not forget to mention that Alabama A&M has its own stud at QB, so this should be one hell of a game.  On top of all of that, it is Alabama A&M’s Homecoming and Jackson State alumni will travel. So, expect a packed house and some national coverage.

Make the drive down I-65 South to the Birmingham Metro and you get 3 games held just minutes from each other!  Conference USA Champions, the UAB Blazers, will face off against Florida Atlantic at the brand-new Protective Stadium.  Just outside of the city-center you get the Morehouse-Tuskegee Classic presented by the City of Birmingham and Alabama Power featuring 2 of the country’s most recognizable and historic HBCUs going head-to-head at Legion Field. This is a classic game that will no doubt bring fans and alumni in from the Atlanta Metro and beyond so the city should be buzzing. Then just to the west in the city of Fairfield, Miles College has its homecoming against Benedict College.  That’s 3 strong games right in the Birmingham Metro so expect a great weekend for eateries, retailers, and nightlife.

Moving down I-65 another 90 minutes to Montgomery, Alabama we find yet another homecoming game with Alabama State taking on Arkansas Pine-Bluff. While we can’t speak much about the Arkansas Pine-Bluff fans and alumni showing up, it is homecoming weekend in the “Gump,” so expect the ASU Alumni to show up in droves to support the home team and celebrate all weekend.

Closing out the big football weekend in the state is an SEC match up in Auburn with the Georgia Bulldogs coming to town.  If these teams are both undefeated by October 9th it will be epic; but no matter the records and rankings this game will bring national attention to “The Plains” as well as plenty of revenue.

Of course, with all this action on the field you can expect plenty of associated weekend fun off the field with day parties, after parties, concerts and more! So, make sure you keep your browsers pointed to Urbanham.com for all the updates.

We should mention that Jacksonville State Gamecocks and the Troy Trojans will host games at their home stadiums but Alabama “Crimson Tide” fans will have to tune in or travel to College Station, Texas (Texas A&M) to see your team in action as Tuscaloosa won’t see any action on October 9th.

Get the complete October 9th, 2021 schedule below: