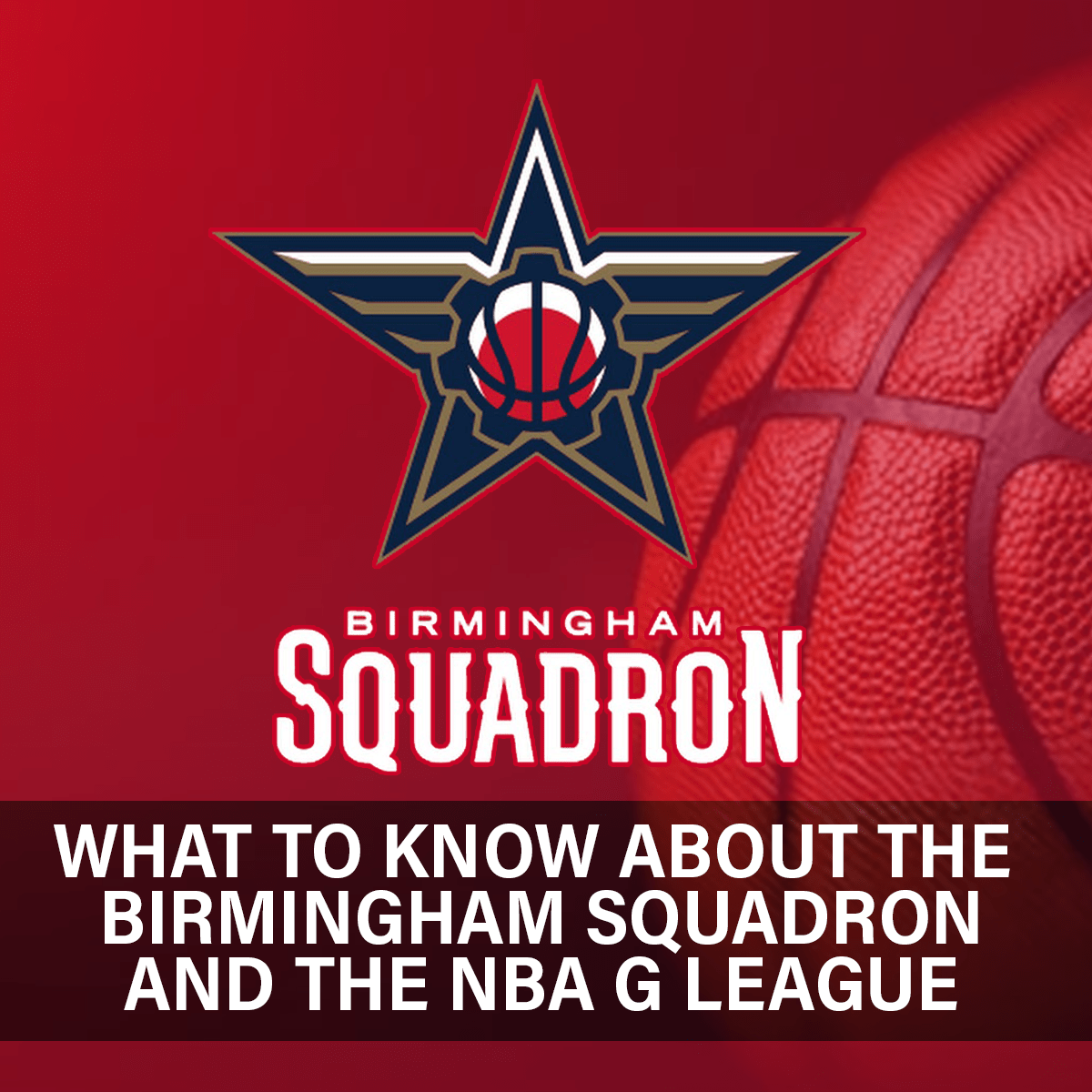 Birmingham, Alabama is the latest beneficiary of a NBA G League team so as we approach the tip-off of the first home game we wanted to give you a non-technical overview of the NBA G League and our new home team the Birmingham Squadron.

First off the NBA G League, formerly the NBA Development League or NBA D League, is the NBA’s official minor league, preparing players, coaches, officials, trainers and front office staff for the NBA while acting as the league’s research and development laboratory. The “G” is for Gatorade who recently signed a multi-year deal to become the sponsor of the NBA Development League which was changed to the NBA Gatorade League (NBA G League for short).

The league currently consists of 30 teams, 28 of which are either single-affiliated or owned by an NBA team, along with the NBA G League Ignite and the Mexico City Capitanes which both serve as exhibition teams.

The Birmingham Squadron is an affiliate of the New Orleans Pelicans NBA team. This means promising players can get pulled up at any time to play in the NBA.  The Squadron/Pelican organization also owns the New Orleans Saints of the NFL which gives a great professional sports foundation for our new home team.

Each team plays a 50-game schedule.  NBA G League players generally do not sign contracts with the individual teams, but with the league itself. This allows them to be called up to the NBA by any team.

G League team rosters consist of a total of 12 players, 10 (or fewer) being G League players and two (or more) NBA players. Players can enter the league at the age of 18 unlike the NBA which requires players to be 19.

At least (2) players on a NBA G League team can be signed to what is called a two-way contract.  These players spend most of their time on the team’s G League roster, but can freely move to their respective NBA team for up to 45 days in the regular season, as well as be a part of the team’s roster before the start of the season (including NBA training camps) and after the conclusion of the G League’s regular season.  However, they are not allowed to be on a team’s playoff roster or play in a playoff game.  Only players with four or less years of NBA experience are eligible for two-way contracts.

Jared Harper. who played at Auburn University was a member of the Tigers 2019 Final Four run, is one of the stars on the Birmingham Squadrons team.  Harper has played with the Phoenix Suns and the New York Nicks.

Huntsville, Alabama native, John Petty Jr., who you may remember from Alabama Men’s Basketball 2020/2021 Sweet 16 appearance ended his collegiate career as the all-time three-point scoring leader for Alabama. He was drafted by the New Orleans Pelicans and assigned to the Birmingham Squadron.

Another exciting player on the Squadron roster to watch with NBA experience is guard Joe Young who played with the Indiana Pacers under a $4 million deal.

Birmingham Squadron home games will be played at the newly renovated Legacy Arena which is projected to be one of the best arenas in the league.  The inaugural game is December 5, 2021 at 5:00PM CT.  See the complete schedule below or visit https://birmingham.gleague.nba.com/

Options for watching the game include television broadcast at MY68, ESPN+ or streaming live online from the birmingham.gleague.nba.com/live website.  You can also listen live on the v94.9FM.

To get an understanding of rule differences between the NBA and NBA G League, game structure, contracts, stats and more visit https://gleague.nba.com/faq/