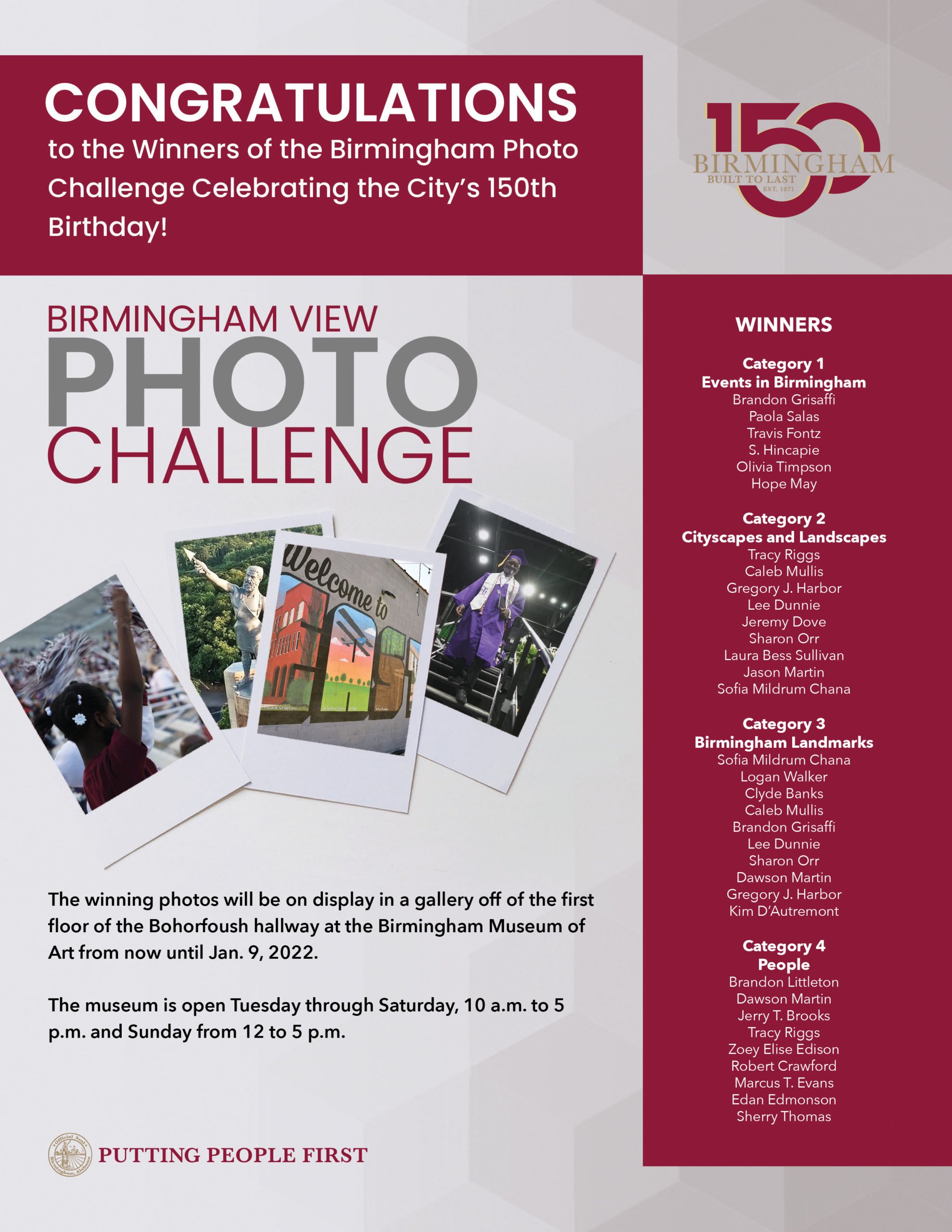 BIRMINGHAM, ALABAMA — Nov. 4, 2021 —  As another way to celebrate the city’s 150th birthday, Mayor Randall L. Woodfin invited the public to submit photos for the Birmingham View Photo Challenge this summer. People answered the call, submitting images that captured the people, landmarks and events of Birmingham.

The winning photos can now be found in an exhibit at the Birmingham Museum of Art. The exhibit will be up until Jan. 9, 2022. Applicants were limited to submitting up to two photos in all, in the following categories: Events in Birmingham; Cityscapes and Landscapes; Birmingham Landmarks; and People.  Some contestants had two winning entries.

“As a son of this city, I’ve always seen Birmingham as a magical, beautiful place. From our hidden gems to areas you see on a daily ride through the Magic City, there are so many treasures that make us proud to call this place home,’’ said Mayor Woodfin. “That’s why I’m so appreciative of all the entries for the Birmingham Photo Challenge. They capture all the people and places that define us—the heartbeat of our city.’’

The photo gallery is located on the first floor of the museum. If entering the museum from Rev. Abraham Woods Blvd., you will enter the front door, go up the stairs and make a right. The photos are in the second gallery to the right. A list of winners are on the attached flyer. For more on the exhibit, go here.

Judges were impressed by the entries, marveling over the creative choice of subject matter and the composition. “The selections really represented the breadth and richness of life in the Magic City,’’ said Graham Boettcher, director of the Birmingham Museum of Art. The judges included Celestia Cookie Morgan, a conceptual-based photographer and sculptor;  Carolyn Sherer, a fine arts photographer; Darius Hill, chair of the Visual Arts Department at the Alabama School of Fine Arts; and Laura Kate Whitney, of the Birmingham Business Alliance.

The photo challenge is just one of several initiatives Mayor Woodfin announced as part of the city’s 150th anniversary. Another initiative was a letter writing campaign, highlighting people’s love for Birmingham. A local poet, Seneca Wilson, took on the challenge and put his love for Birmingham in a poem and a video.  A copy of Wilson’s poem, “The Magic City,’’ is featured in the museum’s photo gallery. The poem and video are on www.birminghamal.gov/150.

Birmingham officially became a city on Dec. 19, 1871 when the state legislature voted to confirm it as a city.